This historical, six-story cast-iron building is located at 287 Broadway in Tribeca. Even considering the six-story cast-iron frame with Italianate and French influences that makes 287 Broadway stand out from other NYC buildings, the building’s bolder distinction comes from its alias: the “Leaning Landmark.” Historically relevant to the city since the 19th century, 287 Broadway portrayed the transformation of lower Broadway, a once residential boulevard, into one of the city’s commercial centers. 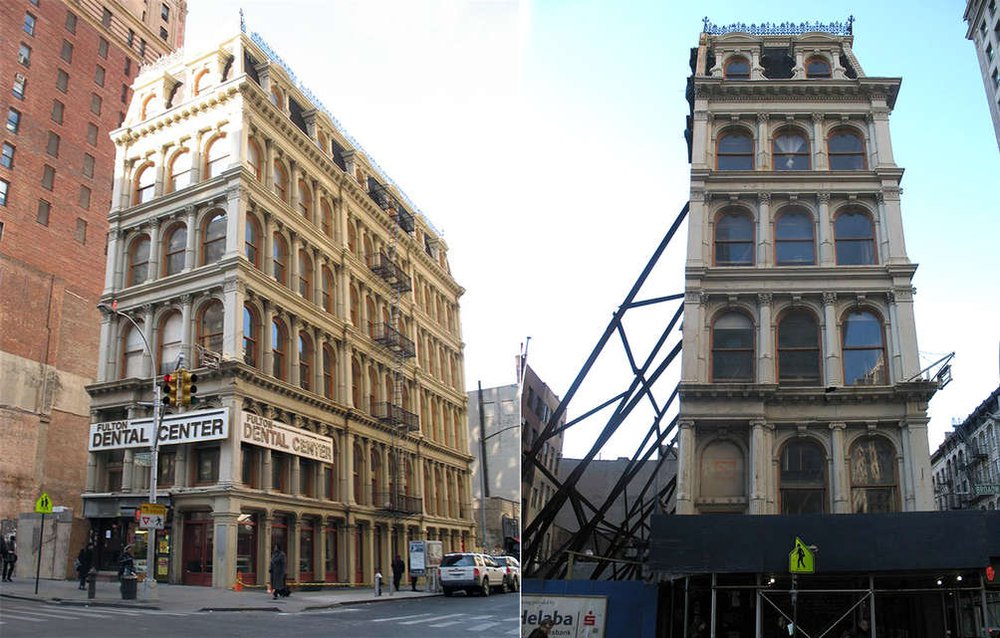 Designed by John B Snook in 1871, 287 Broadway was built for the estate of Stephen Storm as a bank and commercial building. While the building stood strong and met the needs of customers and tenants for decades, it ultimately closed in 2007 in fear of collapsing. With such rich history, many city officials felt that this landmark can be restored to its elegant and natural glory, once again contributing to the uniqueness within the metropolitan area. 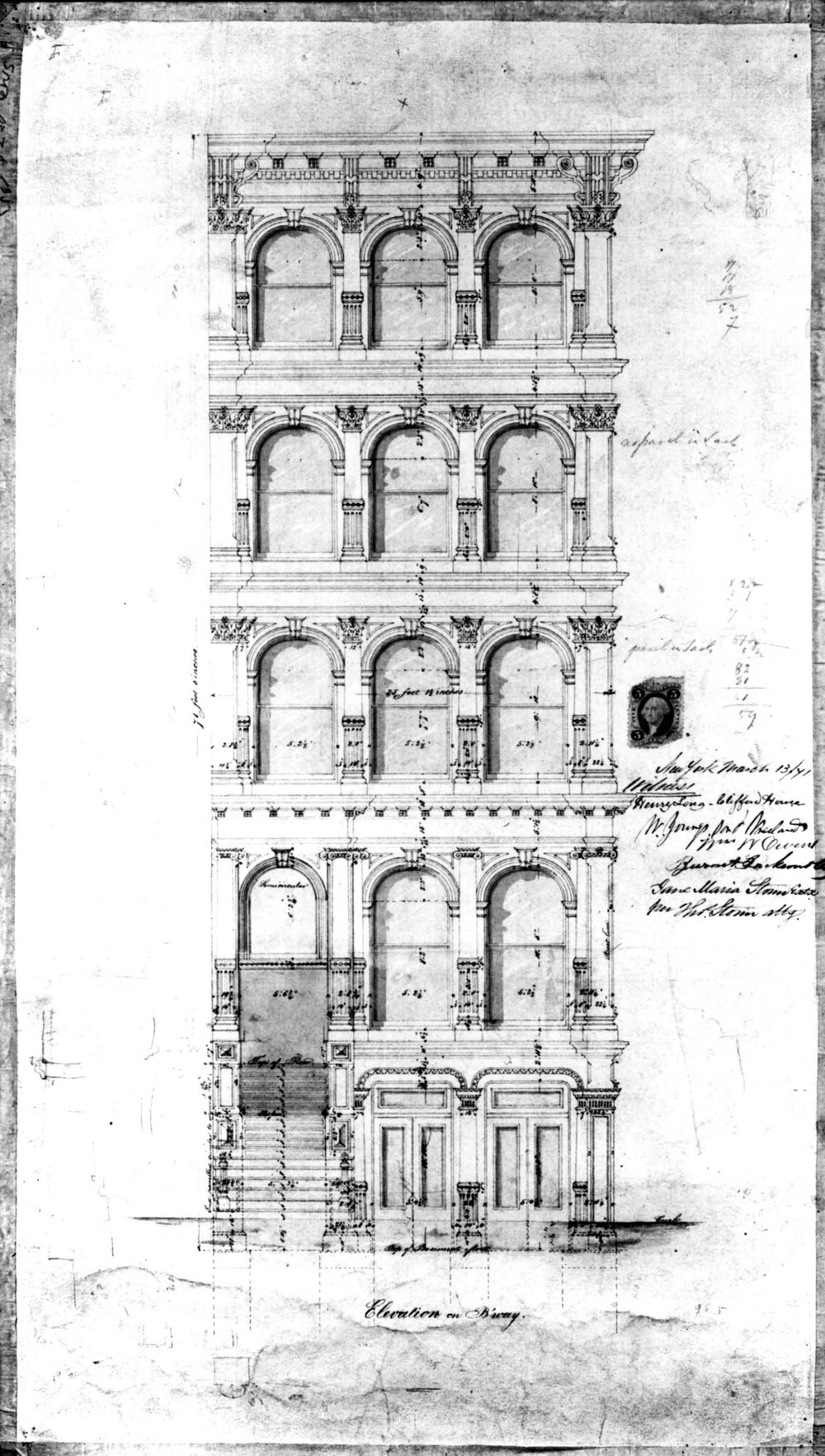 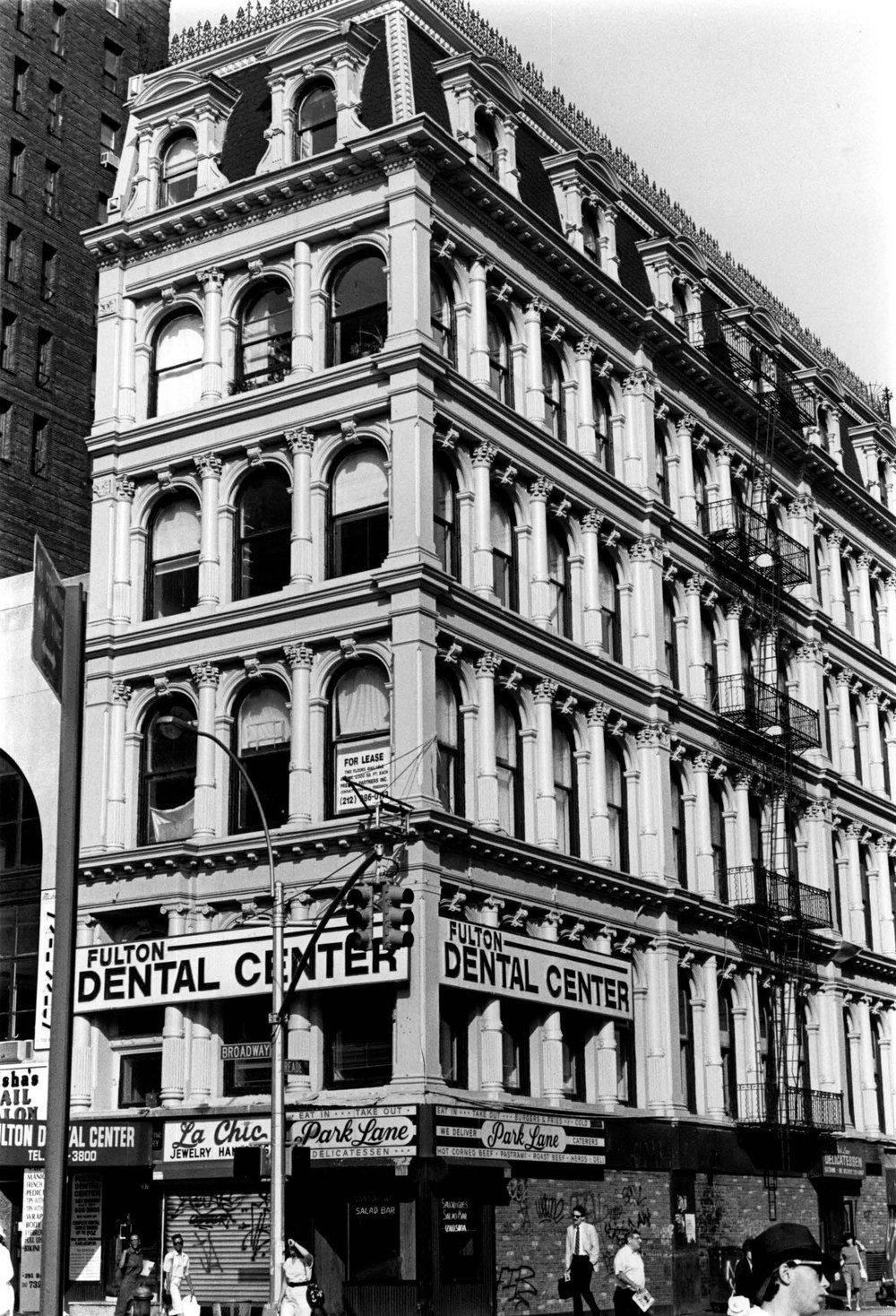 To preserve and salvage 287 Broadway, remodeling the building in a way that instills its original value and design was essential. After multiple investigations, cast-iron facades were broken, connecting pieces were rusted, and roofs were deteriorated due to water damage. Once GF determined that this building was a safe environment to work in, the team restored and replicated many of the cast-iron fabrics. The team removed the non-original ground floor Broadway storefronts and replaced them with existing authentic mahogany and cast-iron materials. GF architects also installed new slate shingles on the mansard roof, added an internal perimeter gutter, and repaired the existing fire escape. After the work was completed, GF was presented with the esteemed Lucy Moses Award by the New York Landmarks Conservancy. This award is the highest honor slated for outstanding preservation work; The Lucy Moses Award recognized GF’s efforts in revitalizing and redefining the 287 Broadway building. 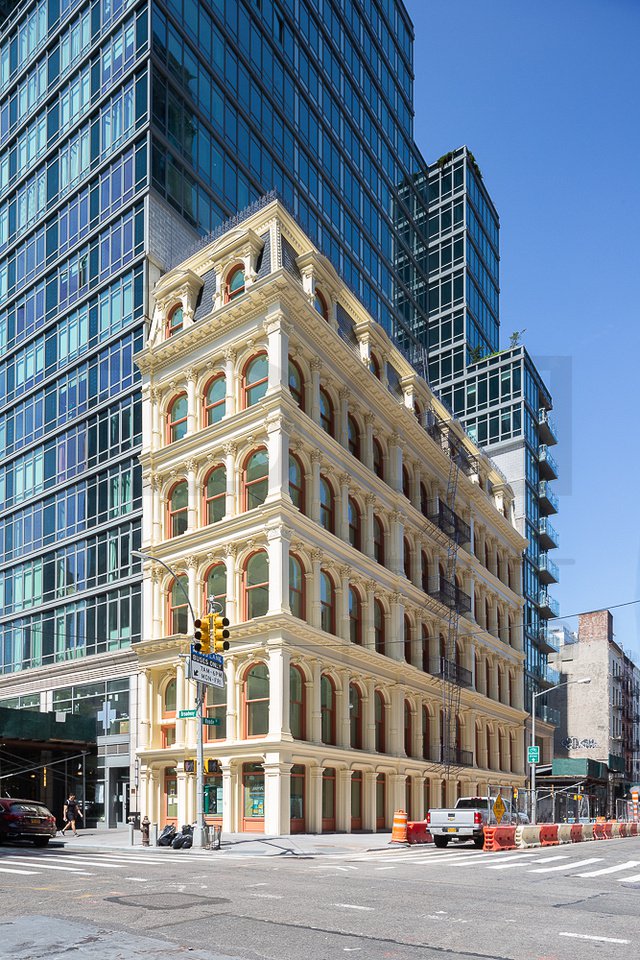 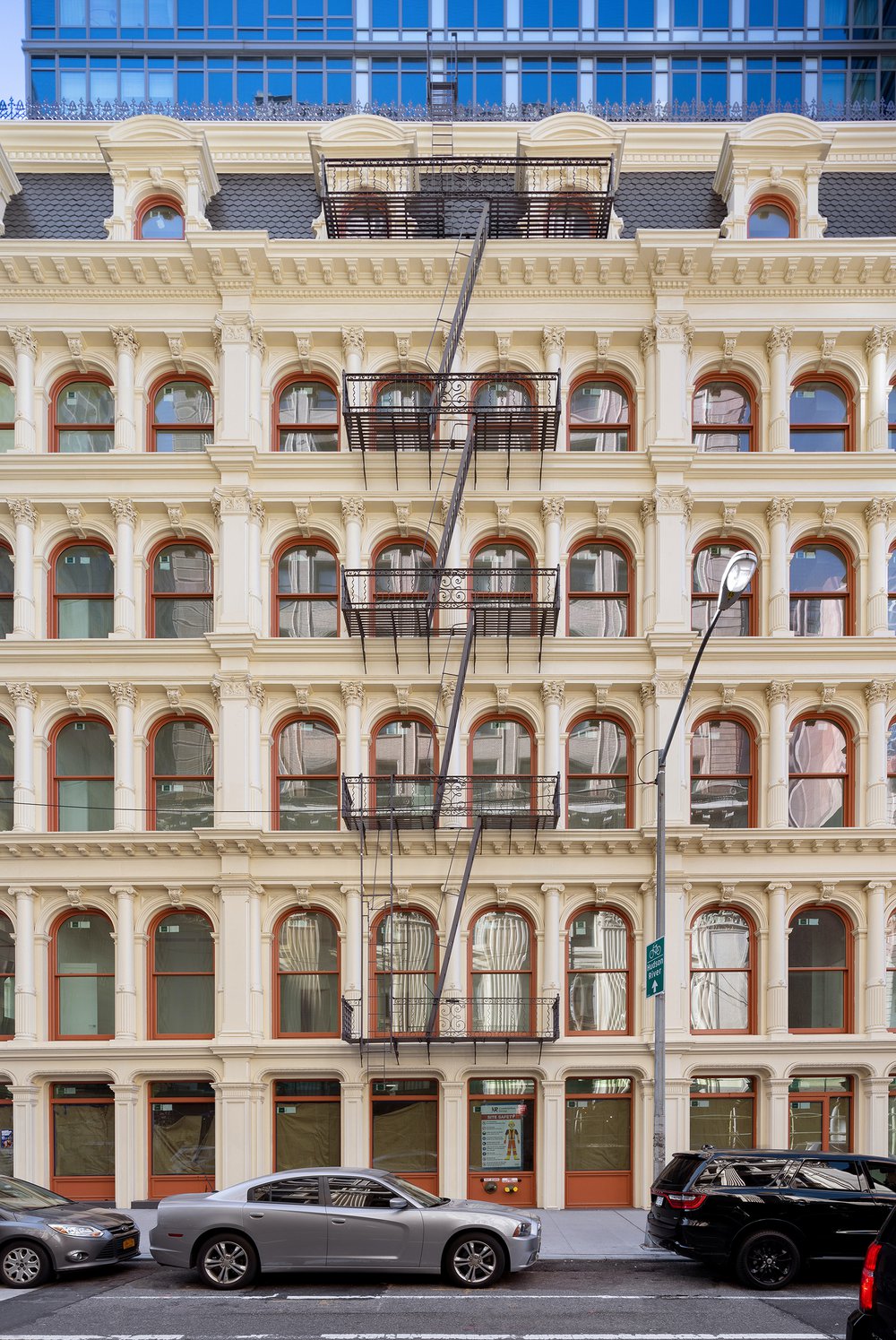 Post restoration and renovation, the exterior of 287 Broadway greatly resembles how it looked in 1872. A contributing factor to this is the building’s first story is now back intact, and the 96-foot-long façade on Reade Street with 52 large windows remains today. Its exquisite Italianate and French Second Empire styles include flat roofs, unbroken walls, and arched windows that allow sun to stream into the building.

There is no doubt that 287 Broadway, or the “Leaning Landmark”, deserves that title as it earned this distinction for the National Register and serves as a nod to the building’s notorious past. Historic renovation allows landmarks like 287 Broadway to share their cultural significance but also add character to ever changing neighborhoods of NYC. 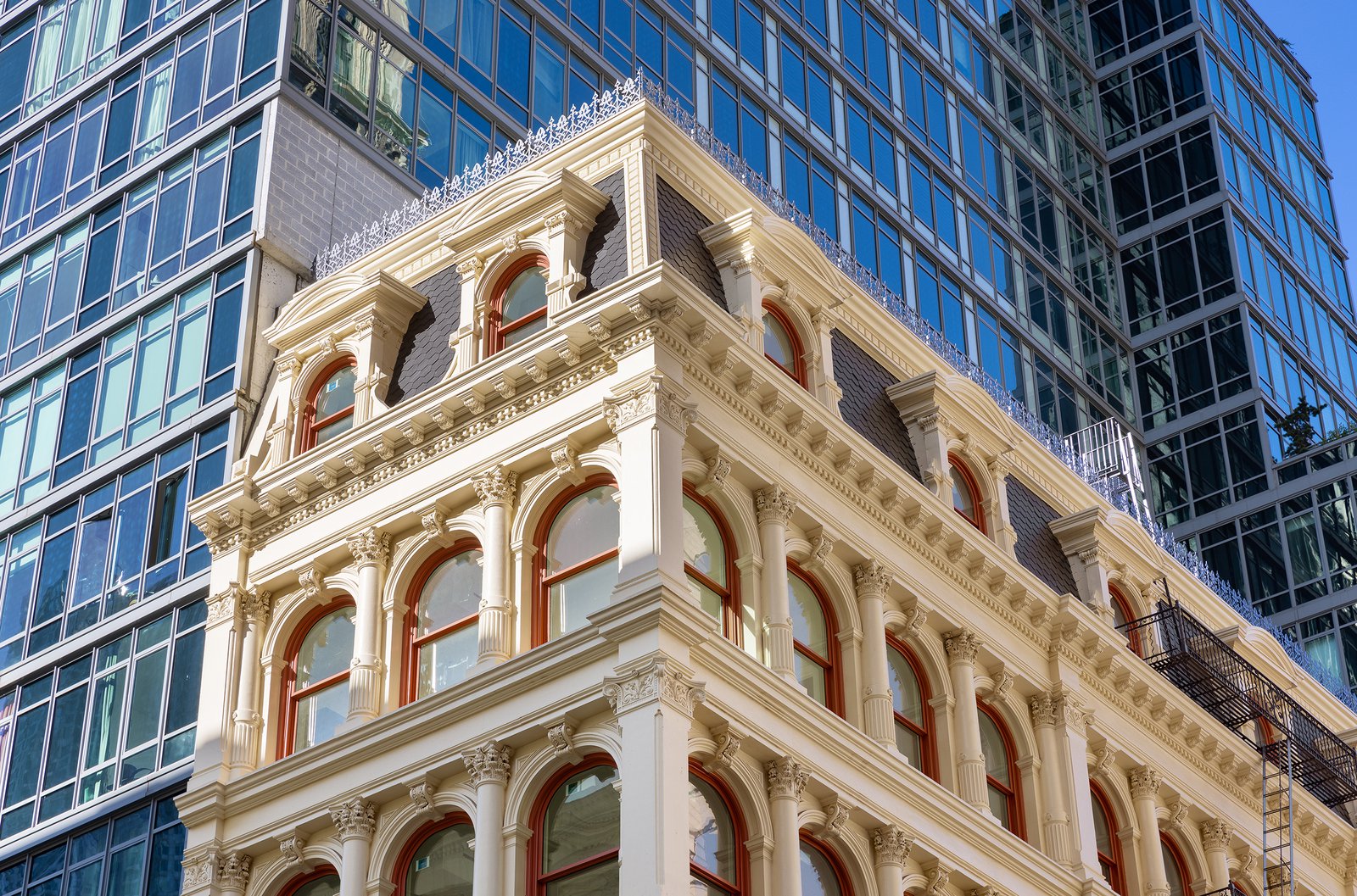 GF has worked on several other historic renovation projects, honoring buildings’ original designs and styles while implementing new, innovative uses for today’s occupants. From the famous Offerman House, to Home Depot on 23rd Street, GF’s expertise with historical renovations/adaptive reuse can contribute in a significant way to a historic building’s continued success in the future.